Home > The Chef > Food on the move

“We’re fighting against the perception that chefs can do it better themselves, but a key element in a good restaurant is consistency. Together with convenience and cost savings, that’s where we can help.”

A Danish Australian married to a Thai might be accused of living the food fusion dream but for Mads Houlberg, MD of Unilever Food Soutions for the Middle East, Pakistan and Sri Lanka, that’s only half the story. His whole unplanned career has, he believes, suited him ideally to his current role.

Almost a two decade veteran of the food service industry, Mads Houlberg claims that he’s “a chef by tradition, with a restauranteur father’. However, his early life in Autralian didn’t inspire him with a love for food as the country was just moving out of being one of the “buffet cuisines of the world’.

So what did inspire you?
I was working in Cairns in Northern Autralia where there was a fair bit of Australian tourism and I just fell in love with the whole concept of understanding your customer. So I moved to Japan to understand the cuisine because nobody in Australia ever seemed to understand what Japanese customers wanted. I worked there for about four and a half years in a very traditional enviroment. Now, of course, Japanese food is very evolved but, for me, part of the apoeal was understanding the background to food. Japanese food packaging is second to none and they have absolutely the best distribution model for fresh produce. I got very passionate about this whole sexy idea of sourcing from a particular place and understanding just what that meant. Then my career took a real shift.

What happened?
I met this guy, a very welathy man who ran a trading company. He was looking for someone to source fish for aquariums and, since I’d fallen in love with the whole distribution scene, that meant I could get a complete understanding of the whole supply chain.

This wasn’t food?
No, it was sourcing and transporting live fish for aquarium tanks. Getting to grips qwith the global logiostics of that was fascinating. After a while, to evolve, I realised that I needed to understand the beverage sector…

You’re jumping around!
Well, my overall game plan was to open up my own restaurant someday so I needed to get a grasp of the whole industry. Anyway, after a time I joined the suit and tie brigade and spent six months doing media buying for a radio station!

I assume this comes back to food…
Yes, I took a job as sales rep for EOI Foods out of Sydney. It was part of Unilever and it was a way for me to get back into the food side. In fact, my background meant I was well suited to call on chefs because I understood their needs. I got onto national accounts, did some menu development and then, in 2003, joined Unilever’s global marketing team in Thailand and then in China. A couple of years later I moved onto global sales and, in 2010, was asked to consolidate operations across Asia from singapore.

And then Dubai.
Yes, a couple of years back again with some consolidation. Last year we were successful and we’re now putting renewed focus on our heartland brands like Knorr and Hellmann’s.

How is the market here?
For me, it felt like coming home with everyone having a common agenda. People aren’t afraid to try things here and there’s a real progressiveness in the market. Business is good and we had 40 new hires last year – we’ve never had such a large operation in the region before. In terms of food service, people see the US as the trendsetters but like to mimick Japan. I’m seeing Dubai as the test bed for the region.

What outlets impress you?
I like Eataly. In fact, I don’t think you could build a place like that in many cities of the world with so many great ideas all together. Jones the Grocer is pretty much cut and paste but they know what works. Tom & Serge are really delivering a new style of cafe culture to Dubai. Other local players? I don’t think Limetree has the potential to go global but I think what they’re doing will rub off across the Gulf. The city is interesting and developing fast though clearly we’re not yet at the stage of Melbourne or New York. In fact, it’s a melting pot and people are just trying to figure out what they want us to be famous for.

And your personal taste?
I say, ‘Go Nuts!’ Just explore flavours and take the real opportunity for fusion here. Somewhere like JBR is phenominal and it’s interesting to look at what the response will be from hotels. I think one niche area for expansion will be really good teas and coffees, premium waters.

What’s the challenge in selling to chefs?
They’re pretty basic people who often want to try their best and that is where I think UFS can really try to help. We’re not here to replace their culinary skills but we can save them time and pressure, allowing them to put their effort into creativity in he kitchen.

Of course, you’ll know the reaction from many people when they saw Marco as the celebrity face of Knorr…
Yes, but I also know how that deal came together and it wasn’t UFS who made the first move. It comes down to this: ‘Can I afford the gas for eight hours to make a demi-glace or should I use a quality product?’ You know, I’d love to do ‘the Pepsi challenge’ with Hellmann’s. We’re fighting against the perception that chefs can do it better themselves, but a key element in a good restaurant is consistency. Together with convenience and cost savings, that’s where we can help.

What’s missing in the local food scene?
Well, the amount of produce available here is just awesome and the quality coming in is often fabulous. But what I’m not seeing, from a chef’s perspective, is a chef’s deli. It’s just not there. I love the cafe culture here but I think it’s still in an embryo stage with too many fanchises and not enough independent operators. and I’m not sure I fully understand the apparent craze for burgers here! 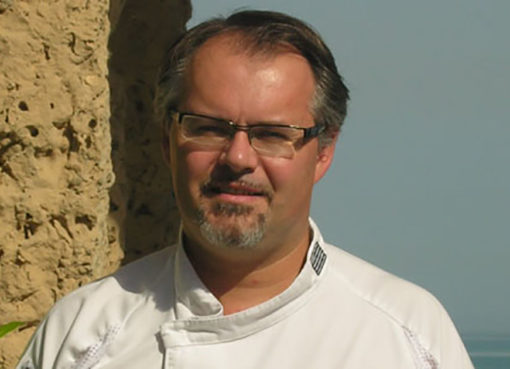 The view from Kuwait

Back in 1980, the Radisson Blu in Kuwait City was 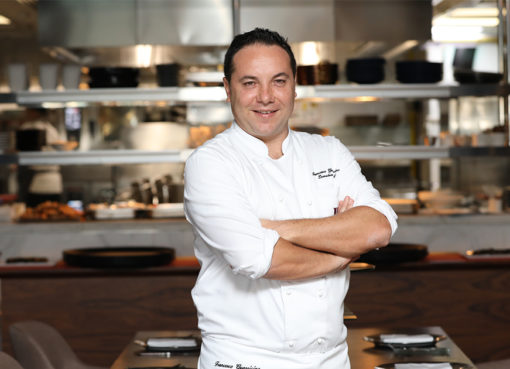 Roberto’s Francesco Guarracino on the return to Italian classics

Having undergone an extensive renovation at the end 2018, Roberto’s